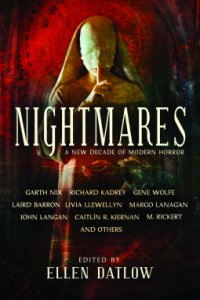 For one, I’m new to this review business as a professional reader, but I do know Ellen Datlows anthogies for several years now and this one doesn’t disappoint me one bit. It is not „Darkness“, okay, that is to say, it doesn’t draw from an as of now already classic period of horror fiction – the 80s and 90s -, but from the decade just past, it doesn’t draw from a twenty years time frame and it has not as many heavy weigth authors on board as its predecessor. All this considered, it is still an anthology which shines with masterpieces of as always satisfying Gene Wolfe, Laird Barron, Nathan Ballingrud, John Langan and a long row of authors one may not yet have heard of, but which nevertheless may chill ones bones. Gemma Files contributes a meticulously done and successful experiment, „Sandman Slims“ Richard Kadrey, Garth Nix and Caitlin R. Kiernan are included – well, I think, some years in the future „Nightmares“ could likely have become a classic anthology, representing its decade pretty good.