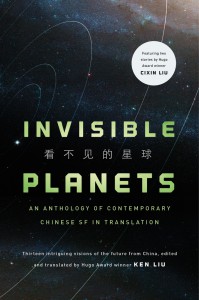 Invisible Planets: fortunately these gems have not been invisble for some time now. All of the collected stories have been published (in translation) before in well known periodicals. Now they are one piece. Don’t know, what is to be expected? That’s because this is Sense of Wonder!
For a long time undisclosed to the english speaking readership, there has been a whole world of SF in China, which Ken Liu (The Grace of Kings), translator of all the stories in this book, finally reveals. Want to know what happened in the Year of the Rat, or how to fold a city like Beijing? Take this up and be astounded.
Yet what Liu claims in his foreword to the edition is, that this is not about what makes these SF stories chinese, but what about these chinese stories is worth to be known to non-chinese speaking SF-readers, and the answer is: all of it.
Stories by: Chen Qiufan, Xia Jia, Ma Boyong, Hao Jingfang, Tang Fei, Cheng Jingbo, and, last but not least, the much lauded Cixin Liu (The Three-Body-Problem).
What IS to be expected is the full range of fiction, from the social approach to science and future, up to Hard SF. Also additional nonfiction (namely three essays), which makes this all the more a milestone in global SF history.
And about the hard work, Ken Liu put into this? As they say: it takes a master to translate masters. Liu is a master, quod erat demonstrandum.